Saved Searches Advanced Search
Chinook Arch libraries are closed until further notice. Holds on our physical collection are paused.  If you have library items at home, please keep them until libraries reopen—no late fines during COVID-19 closures.  Visit https://chinookarch.ca/elibrary to borrow from our virtual collections. Questions?  Email arch@chinookarch.ca
Print 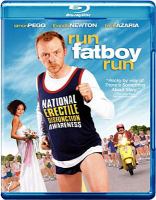 Dennis is a clueless and slightly overweight guy. Five years ago, he left Libby, his pregnant fiancée, on their wedding day. Realizing he made a mistake, Dennis tries to persuade her that he loves her and wants her to accept him back into his life, but he meets with failure at every turn. When he discovers that Libby has found Whit, the new man in her life, the frustration Dennis feels grows. Denise vows, that for once in his life, he will finish something and decides to train for the Nike River-run in London. With his friends Gordon and Mr. Goshdashtidar by his side, Dennis begins training for the marathon he must finish.
Edition: Blu-ray widescreen version
Copyright Date: ©2007
ISBN: 9781419875106
1419875108

This comedic film stars Simon Pegg and is directed by David Schwimmer. Five years ago, Dennis left his pregnant girlfriend at the altar. Today, he realizes that he wants her back. The problem? She is now with a handsome and athletic man who does charity. In order to try and win her back, he enters a charity race hoping she’ll give him another chance. I found the character of Dennis very difficult to like or feel bad for, which made it hard for me to root for him to succeed. It did, however, make it easier for me to enjoy all of the jokes made at his expense. I would rate this movie 3.5/5 stars for being entertaining enough to watch, and would recommend it to those who can laugh at just about anything. @The_Reviewer of the Hamilton Public Library Teen Review Board

This one took 20 minutes or so to gain momentum, but after that point it was entertaining enough to merit watching. And then it rewards you with some fun laughs and some emotion. Was also interested in this movie for some time with David Schwimmer as the director (think: plays the funniest character on "Friends"!)

Another cute flick about a man trying to make up for his past mistakes. Dennis is clueless but absolutely in love with his ex and son and will do whatever it takes to get them back. When checking out this film, think father-son relationships, love triangles and touchy family moments. It was OK only because it wasn't original.

Predictable, formulaic, silly jokes; bland, and the protagonist is fairly unlikeable. But at least this movie didn't annoy me.
Worth the price that I paid, $0.00.

Every time I see this guy: Simon Pegg, I like him more and more. Im still searching for the movie he is in that I do not enjoy. Unfortanely, I enjoyed this one very much too.

Simon Pegg is an amazing actor and comedian which I have been following since his stint on SPACED. He's subtle and awkward while foolishly attempting to be smooth an cool. Something which is more than easy to relate too.

Run, Fatboy, Run was very entertaining and kind interesting in it's own sense. I truly believed Dennis was going to do much more than he did, like any heartfelt comedy, but this movie took a strange and weird turn towards the end.

Funny, entertaining, and yes sadly I'll admit this film was rather encouraging. The characters were hilarious in their own respects and even the antagonist had a little flavor to him. Not just another Jerk, you actually felt [at least I did] that he [Whit] had a chance to teach Dennis something thoughtful and inspiring. Sadly I was mistaken, much like I am which I watch a Pegg film, just when you catch on to what's happening, he switches it up on you.

Predictable and corny, but still fun.

It is a heartwarming comedy.

Gordon: Hey I've got you those tickets you wanted...
Dennis: They were for yesterday!
Gordon: Oh so NOW you don't want them?
Dennis: Why would I want them?
Gordon: You could... sell them on e-bay.
Dennis: Who would buy tickets for an event which happened yesterday?
Gordon: ...Time Travellers.

Whit: I actually ran the London Marathon
Dennis: Oh that's a coincidence.
Whit: Why's that?
Dennis: Oh, I watched it on the tele... well... the last hour... I sleep in on Sundays

bdls206 thinks this title is suitable for 13 years and over

Five years after jilting his pregnant fiancée on their wedding day, out-of-shape Dennis decides to run a marathon to win her back.