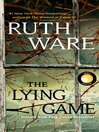 From the New York Times and #1 Globe and Mail bestselling author of blockbuster thrillers The Woman in Cabin 10 and In a Dark, Dark Wood comes a chilling new novel of friendship, secrets, and the dangerous games teenaged girls play.
"I need you." Three small words that change everything.

Isa Wilde knows something terrible has happened when she receives this text from an old friend. Why else would Kate summon her and their two friends Thea and Fatima to the seaside town where they briefly attended school together seventeen years ago?

The four friends first met at Salten House boarding school, where they quickly bonded over The Lying Game, a risky contest that involved tricking fellow boarders and faculty with their lies. But the game had consequences, and the girls were eventually expelled after Kate's dad, their beloved art teacher, mysteriously disappeared. Forever bound by their lies but needing to forget their past, they went their separate ways—Kate remaining in Salten while the other three left to start new lives in and around London.

Now reunited, Isa, Kate, Thea, and Fatima discover that their past lies had far-reaching effects and criminal implications that threaten them all. In order to protect their reputations, and their friendship, they must uncover the truth about what really happened all those years ago.

Atmospheric, twisty, with just the right amount of chill, The Lying Game will have readers at the edge of their seats, not knowing who can be trusted in this tangled web of lies.
Publisher: Simon & Schuster

Not the greatest of books I have read. A little boring at times and almost didn't finish it.

Sooooo boring! The main character, Isa, is an awful, selfish, horrible, stupid woman. Her partner is a spineless jellyfish. They are both lawyers, but know nothing about the law. This story is long and drawn out, spending more time on describing every single time Isa breastfeeds her baby than on the actual “mystery”. This book was more of a story about women and their friendships; boring women that have no personalities and are not likeable at all. I ended up skimming the last half of the book, which helped with my frustration of all the tedious, pointless flowery text. Don’t know why I even skimmed to finish it. Should have just stopped reading. By the end I didn’t care “who done it” or why. Everything to do with the “mystery” made no sense and seemed like an afterthought and thrown together. Steer clear of this word vomit.

Another good one from Reese’s booklist. Enjoyed it very much.

I could barely bring myself to finish this book. It was very boring and didn’t have any suspense until the last few chapters, and even then it wasn’t enough to keep me interested. I would not recommend it to anyone.

This was a suspenseful novel, but I did not enjoy it much. I could not identify with the protagonist, and I felt like she kept making stupid choices. There were parts when I wanted to know some answers, but I felt like the characters were hard to understand. I would not recommend this novel.

The story turned out to be a page turner. There is rising tension as the author provides clues of a terrible past event in the teens' life and then how that event comes back to haunt them as adults with established careers. Through flashbacks the author establishes the close friendship the group had as teens for a year and a half when they were boarding students at a seaside residential school. This description of their after school activities, which do not make them sympathetic characters, lays the foundation for the rest of the story which occurs 17 years later and explains why the friends are so eager to help each other when one gets in trouble. The conclusion has a satisfying twist. The novel is probably more suited to female readers as the 4 lead characters are female with one being a nursing mother (too many breast feeding descriptions) who is inseparable from her 6 month old baby. Not often does one find a baby so entwined in a mystery plot, but in this novel that bond emphasizes the strong relationship a parent has for their child - perhaps the crux of the story.

wanted to like this book but it really didn’t do anything for me. 🤷🏽‍♀️

The first 2/3s of the book were slow. I felt that I was reading about some mal-adjusted teenagers who never matured. The last 1/3 got more interesting. Rather depressing and sad.

It's such a task to read her books. No character development, so much of story is wordy without forwarding the plot. Didn't finish it.

coxkelsey72 thinks this title is suitable for 17 years and over

Isa Wilde was a teenager when her father sent her to the boarding school called Salten House. Her mother was dying, and her father wanted her to have a more stable life than he could provide. By the time she had finished her first meal at Salten House, she was friends with her roommate, Fatima, and with two other girls, Thea and Kate. Thea and Kate introduce the others to the Lying Game. Thea had been subjected to teasing when she was the new student at other schools, and she had created the Game because of the experience. Instead of targeting the new students, she targeted the popular girls and sometimes the faculty. Isa, Fatima, Thea, and Kate became inseparable and spent most weekends at Kate's home under the supervision of Kate's father, Ambrose. Ambrose was the art teacher at Salten House. He was lenient with the four girls and his stepson, Luc.

The girls always called on each other when they had problems. One Friday night they rushed to Kate's side to find that Ambrose was dead of an apparent suicide. Kate was just short of her 16th birthday. She convinced Isa, Thea, and Fatima to help her bury the body. She knew child services would force her into foster care if officials knew Ambrose was gone. They hid the body. Then, Isa, Thea, and Fatima returned to their dorm rooms at Salten House. They were roused early the following morning when their housemistress, Miss Weatherby, showed them drawings apparently drawn by Ambrose. The girls were featured in the drawings, and they appeared to be nude, though Isa knew they were not. Kate claimed that she did the drawings, and school officials decided that the girls should leave immediately to avoid expulsion. Kate waited until she was 16 to reveal to officials that Ambrose was gone. Her stepbrother, Luc, was returned to his biological mother in France. He was abused and returned to Salten Village as an angry adult.

The girls contacted each other a few times over the years, but each knew they could call on the others if they were in need. Isa was a lawyer and mother by the time Kate summoned them. Ambrose's body had been found more than 15 years after they hid it. Kate covers the arrival of the other three by saying they planned to attend an event at Salten House, but she uses the visit to alert them of the police findings. The investigation continued and police discovered that the body belonged to Ambrose and that he had died of an oral heroin overdose. Since the police determined he died under suspicious circumstances, the four women knew they would be questioned.

Isa begins to question the details of Ambrose's death. He died on Friday, but the drawings were not in school official hands until Saturday morning. She learns that Kate and Luc had been involved in a sexual relationship that Ambrose felt was incestuous, though the two were not related by blood. Ambrose had planned to send Luc to a boarding school to separate the two. While Isa, Thea, and Fatima initially wonder if Kate had killed Ambrose, they learn that Luc was the killer. They also discover that a local woman, Mary Wren, had been threatening and blackmailing Kate for years.

Kate and Luc die in a house fire, leaving Thea, Isa, and Fatima to answer police questions about Ambrose's death. They agree on a story and are determined to stand by that version of events to distance themselves from any participation in Ambrose's death. Isa tells the father of her child that she loves him. Though she knows it is a lie, she is determined to stand by it in an effort to make it true.

“A lie. I'd almost forgotten how they feel on my tongue, slick and sickening.” - p. 6