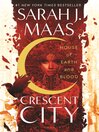 House of Earth and Blood

#1 New York Times bestselling author Sarah J. Maas launches her brand-new CRESCENT CITY series with House of Earth and Blood: the story of half-Fae and half-human Bryce Quinlan as she seeks revenge in a contemporary fantasy world of magic, danger, and searing romance.

Bryce Quinlan had the perfect life-working hard all day and partying all night-until a demon murdered her closest friends, leaving her bereft, wounded, and alone. When the accused is behind bars but the crimes start up again, Bryce finds herself at the heart of the investigation. She'll do whatever it takes to avenge their deaths.

Hunt Athalar is a notorious Fallen angel, now enslaved to the Archangels he once attempted to overthrow. His brutal skills and incredible strength have been set to one purpose-to assassinate his boss's enemies, no questions asked. But with a demon wreaking havoc in the city, he's offered an irresistible deal: help Bryce find the murderer, and his freedom will be within reach.

As Bryce and Hunt dig deep into Crescent City's underbelly, they discover a dark power that threatens everything and everyone they hold dear, and they find, in each other, a blazing passion-one that could set them both free, if they'd only let it.

I snorted every time I read the word "alphahole". I rolled my eyes every time a character growled and smirked. The sexual euphemisms are enough to make you gag. It's adult, Mrs. Maas, let's get adult about it. BUT, it was fun. I tore through this behemoth clocking in at 816 pages. I loved Maas' characters. All of them. No matter how cheesy, serious, good, or wicked. Everyone has a purpose. The twists and turns of the story were predictable and I didn't care because she crafted the story well. Despite my typical grievances with her novels (the male/female crap, the scenting and snarling, and everyone being beautiful as all hell) -- I was still enraptured. I laughed a little, cried a little, and at the end I had to force myself to slow down and pay attention. A true blast to read and I'm looking forward to the next one.

If you like reading the F word a million times, mostly used unnecessarily, and you like arrogant alpha males trying to protect the strong heroine who is always totally annoyed by them, then read this book. I think Maas is a good storyteller, but I wish she would just raise the maturity level.

This was the first book I have read by Maas. I see her YA books all the time when checking others out in that section and saw this come it, added it to my hold list and picked it up right before DCL closed due to the pandemic. Lucky me! This story was written beautifully. The fantastastical world and characters were incredibly described and developed. The twists and turns of the story left me on the edge of my seat! You will laugh and cry, you will be mad and sad but hold on because the 800 pages is just not long enough!

This is a masterpiece. I really took my time with it, kind of because life got insane, but also because I savoured every word. I wonder if there will come a day where I don't rate an SJM book 5 stars...in any case, today is not that day.

In Bryce's world, vampyrs, fae, angels, and all manner of otherworldly entities are not otherworldly at all, but instead, regular citizens. In her world, humans are lesser than, looked down upon, and as half-Fae, Bryce is almost worse. Cursed (blessed?) with no power, she works for an antiquities dealer, dates other normal human males, and parties with her friends. But when tragedy strikes, Bryce is forced to work with an angel, Hunt Athalar, to search for what could be a dangerous serial killer on the loose in Crescent City.

Trying to avoid spoilers in the synopsis is extremely challenging, but I went into this having not even read the inside cover summary, and because of that, it was an immersive experience like no other. I would recommend that to anyone thinking about picking this up; don't let Sarah's other books colour your judgement going in, for better or worse. Don't read the synopsis, don't go on Goodreads and read spoilery reviews, don't search the tag on Tumblr. You'll thank me later.

A major strength of this book for me is how it is technically still "high" fantasy with the other world elements but it almost feels and reads like paranormal fantasy. I love Sarah's other series, will read literally anything she throws out into the universe, but I wondered if we'd get something similar with this first adult series (fae, high fantasy, etc.). Although we got the fae aspect, this is basically a modern world, and the addition of technology with the different Houses and how everything feels familiar enough yet also alien and fascinating is SO ORIGINAL and SO COOL.

SJM's strength that draws me in so hard every single time is her characters. Bryce is a character I would normally hate in this kind of paranormal-feeling fantasy. She's that gorgeous, curvy, sassy party girl - but, because it's SJM, of course that's not all she is. And Hunt is more of her classic broody man, but at the same time, he's so distinct to me, and such a rock of a character too. He's who I want saving me if I need rescuing from a fire or something. And Ruhn! God I loved him. The party boy with the heart of gold. The development amongst the three of them was handled with such grace and patience over the course of the 800 pages. No character is ever just one thing, never reduced to a stereotype, and man, did it all move me to tears multiple times.

I've said it before, and I'll say it again here, what pushes a book to a five star rating for me is the element of surprise. I don't want to be able to predict what's coming. And here, boy oh boy, did I have no idea how this was going to end. The mystery is so well-handled, I never felt impatient, and every time Hunt and Bryce were following a lead, I genuinely thought it was a good one. There were so many intricate connections, but at the same time, it never felt overwhelming. And the ultimate payoff, the reveal of everything, is so wonderfully satisfying and moving and emotional.

The emotion is what does it for me with SJM too. She always manages to weave these emotional threads through everyday, mundane happenings in her books so that when she tugs on them later you can't help but sob and wonder how you got to this place. I was crying at work by the end of this one. Her characters are so realistic, her worlds so well-developed, her writing so beautiful, that it all just comes together in this perfect storm of fiction that I can't help but absolutely adore. I love this book, and I can't wait to see where we go from here.

I loved this novel so much. From the very beginning, I was attached to the main character, and through everything she went through, I felt like I was right there with her. Maas has a way of writing that pulls you in and you feel like you can’t leave, or you’re missing out on something big. The end of the novel was an emotional roller coaster. I cried, I laughed, I cried, I was happy, I sobbed... and that ending... My God. The only thing I don’t like (and don’t get me wrong - I’m a young adult who curses like a sailor) but the use of all the variations of the word “fucx” got kind of old. That’s my only qualm. Otherwise, READ THIS. READ IT NOW. ALL EIGHT HUNDRED AND WHATEVER PAGES. You won’t regret it, I promise. (Also, I wanted to note a lot of people complain about her sex scenes, but this book has one. ONE.) Anyway, read it.

Review excerpt: "Perhaps unsurprisingly, after reading 'House of Earth and Blood', I posit that the best barometer of whether or not you will enjoy this book is whether or not you have enjoyed Sarah J. Maas’ other books. All the hallmarks of Maas are here: a beautiful, semi-outcast heroine hiding an incredible power; a super-powerful, much older hero with a dark past; a jam-packed cast of intriguing secondary characters; loads of snarky and sassy dialogue, and nonstop, high-stakes action in the latter sections of the book."

This book is sooo good!

navy_wolf_538 thinks this title is suitable for 15 years and over

Horses4ever thinks this title is suitable for 16 years and over

kBj21 thinks this title is suitable for 18 years and over

There are no summaries for this title yet.

There are no notices for this title yet.

There are no quotes for this title yet.